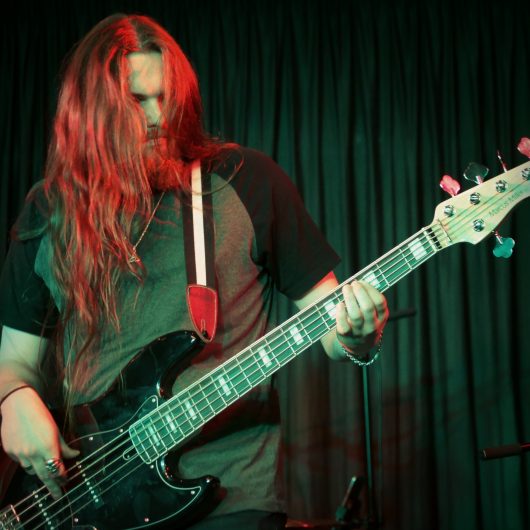 With a genetic predisposition to music Breandan discovered his talent and passion for music in his late teens.

He started his path in music as a rhythm guitarist but switched to bass as he wasn’t fulfilled as a guitarist. He has a knowledge of drums and is a baritone vocalist. Having studied at Hagley’s school of music for 3 years Breandan now studies at Ara music arts getting his bachelors.

Breandan also practices being a luthier and has built and designed several guitars and basses. He is skilled with a sound board, setting up stage performances and recording. 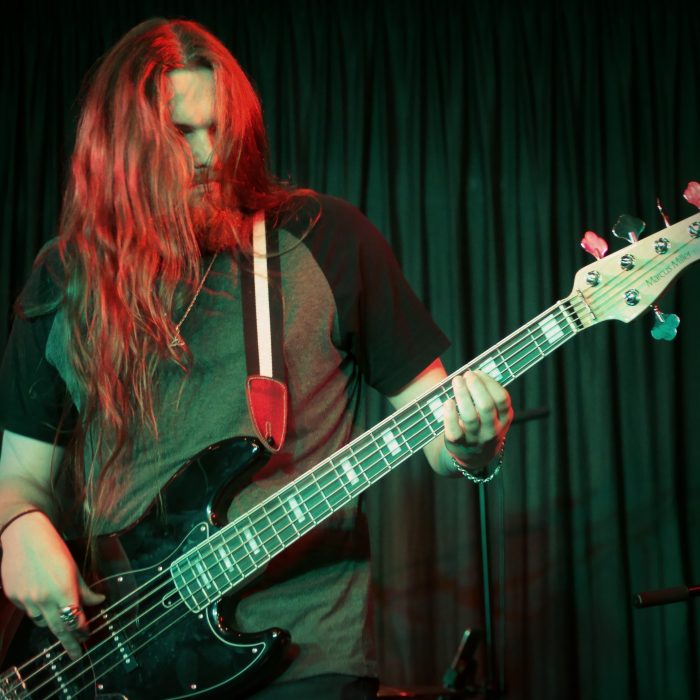 Breandan can’t remember a time where he wasn’t constantly listening to music everywhere he went, from music on the home stereo system to cassette mix tapes in the car fuelling the long journeys around New Zealand, mix tapes of QUEEN, AC/DC, Ram Jam, Foreigner, The B-52’s, Duran Duran, Lenny Kravitz and many more. Breandan’s older sister also had her taste in music so there was often disputes about whose music gets played on the travels as well as who had better taste in music. They still argue to this day.

When Breandan was 5, he used to play Hot Wheels Turbo Racing on his PlayStation1. This video game contained an assortment of tracks from various artist, all good tracks but only one made him enter the settings of the game so it would repeatedly play one song, that song was Fuel by Metallica. Another song on the game he couldn’t resist was Hamster Style by Primus.

It was only when Breandan was 9 did he find a desire to learn an instrument, like every 9-year-old he wanted to learn to play the guitar and signed up for lessons at his primary school. After informing his parents his mother was especially pleased with Breandan’s choice as his mother was a classically trained musician in several instruments as was his grandmother who was a music teacher all her life and had her letters from Trinity College, so music was in his blood. That week his parents went out and bought a ¾ scale classical guitar to his surprise.

After his lessons didn’t go well at primary school Breandan lost interest in playing for a while, but he never lost his passion for music. At 12 he discovered a new variety of music after hearing the songs “Freak on a Leash” by KoЯn and There’s “Nothing for me Here” by DOPE. After listening to these tracks not only did he rediscover Metallica it opened a door to Rage Against the Machine, System of a Down, Dragonforce, Slipknot, Nirvana, Slayer and so many more.

After a lacklustre start at guitar, Breandan rekindled his desire to play guitar when he was 16, buying himself an Ibanez Gio electric guitar. He started teaching himself how to play the guitar with the resources he could find on the internet and in books, he began to learn more about playing guitar in a few months then he did from a whole year of lessons. When his first guitar string broke he quickly learned how to restring his guitar and sparked a new fascination about his instrument and how it worked. One day he began to disassemble his instrument to learn more of how it worked, he learned how to set the bridge, how the wiring functioned and how to maintain it. He reassembled his guitar and with that he started a new fascination.

At about 17, Breandan wanted a new guitar and decided to build one, he picked a Les Paul shape to start with and began designing his guitar, with the aid of the internet and a book he checked out of the library he designed a guitar down to every detail. Within a few months his creation was completed, a shining purple carved top Les Paul which he came to call The Purple Mistress.

When he was 18 he enrolled at Hagley College, he did music there for 3 years. It was here he began having lessons again and even started picking up other instruments, as well as guitar lessons, Breandan started getting lessons for bass, drums and vocals for a year. In his 2nd year at Hagley he continued to play and learn guitar and bass and started to sing in Hagley’s jazz choir called Oddity. During his time at Hagley Breandan got a certificate for being highly commended for his entry in the national Shakespeare song writing competition. He considered vocals his secondary instrument while guitar and bass were his first, he treated guitar and bass equally as his primary instruments but on paper he could only list one as his main, so he went with guitar.

After his 3 years at Hagley and several guitar and bass builds later Breandan decided to enrol at Ara’s music arts program, with a gap in his music theory knowledge he made the decision to do Ara’s certificate course to test the waters before deciding to do a bachelor in contemporary music. With the help of his tutors at Ara Breandan decided to pursue music as potential career.

As of 2019, Breandan is 23 and at Ara music arts doing his bachelors in contemporary music, he made the decision to pursue being a primary bass player because as a guitar player he wasn’t fulfilled as guitarist. Since the switch from being a rhythm guitarist to bass he has found his place as a melodic bass player. Breandan is currently seeking new band opportunities and collaborations.